Angelicoussis and Ioannidis inducted into the Greek Shipping Hall of Fame

With the addition of the Inductees for 2021, the Hall of Fame’s pantheon of great personalities now includes 36 Inductees 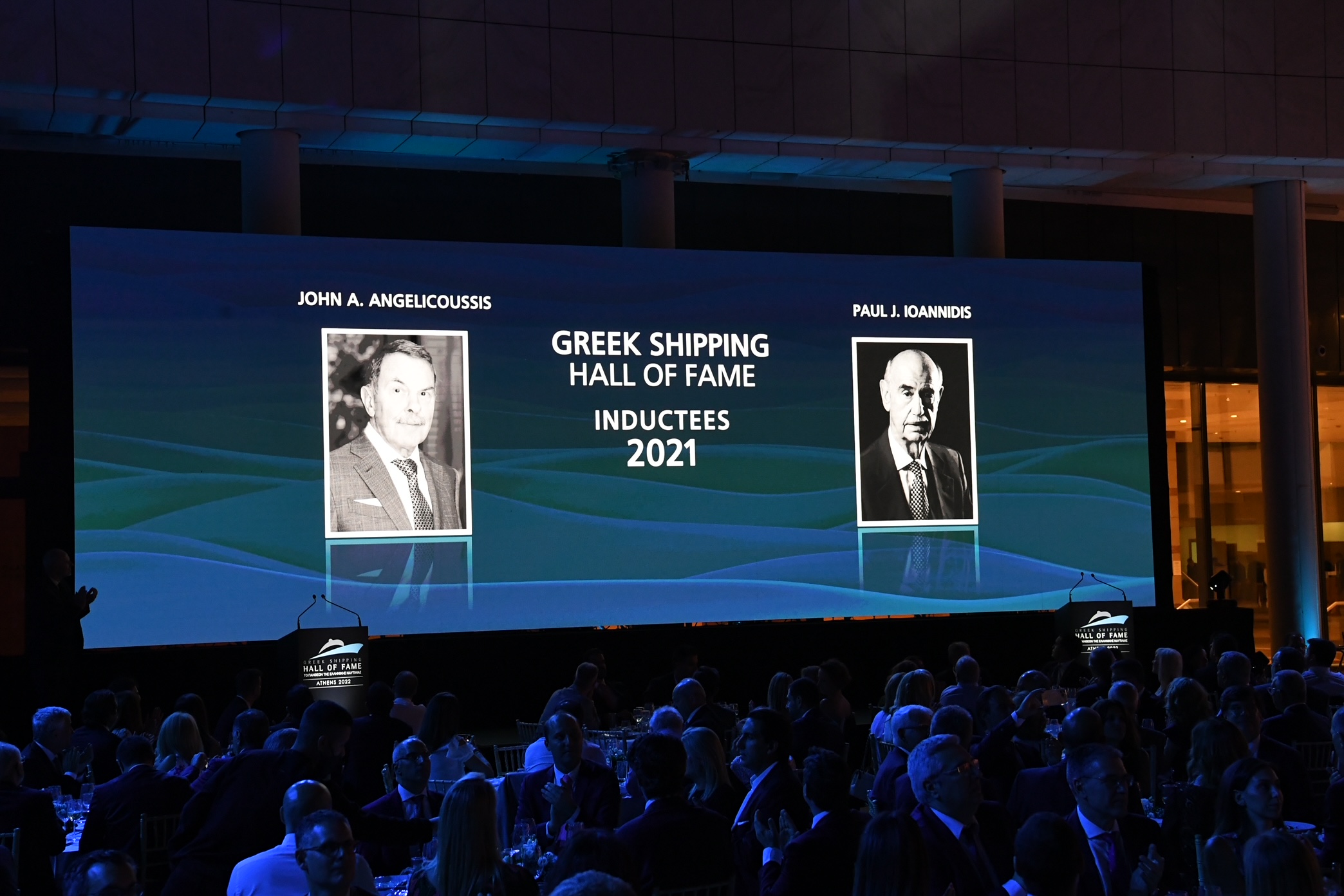 Two of modern Greek shipping’s most admired personalities, John A. Angelicoussis and Paul J. Ioannidis, have been inducted into the Greek Shipping Hall of Fame. They bring the Hall of Fame’s pantheon of great individuals from the history of Greek merchant shipping since the steam age to 36.

The latest Inductees were unveiled and lauded at the Hall of Fame’s annual Induction Ceremony & Dinner that took place in Athens this year on the evening of July 5. Voting for Inductees takes place annually and is open to members of the Greek Shipping Hall of Fame Academy, currently numbering about 300 prominent individuals in today’s Greek shipping community.  The integrity of the on-line voting and the final results are overseen by the international audit firm, Deloitte.

John Angelicoussis, who was born in Piraeus in 1948, was the largest purely private shipowner of his generation and he epitomised many of Greek shipping’s most positive traits and trends.

His mother Maria Papalios and father Anthony, who served as a radio officer at sea, both came from the village of Kardamyla in Chios. Anthony Angelicoussis established his own shipping company after the Second World War and John joined his father in 1973. The two worked together until Anthony’s death in 1989.

John Angelicoussis inherited a dry cargo shipping business including Anangel-American Shipholdings that was publicly listed in Luxembourg and on Nasdaq. Later he came to believe that it was better for shipowners to remain private if they could.

He did not take long to put his own stamp on the business. In 1993 he ordered the group’s first five capesize bulkers at Hyundai Heavy Industries. At the time they were the largest bulkers ever ordered by a Greek owner.

At the same time, Angelicoussis greatly expanded in tankers, initially using Kristen Navigation as the name of his tanker management arm. In 2003, he established Maran Gas Maritime as the first fully-fledged Greek-owned LNG carrier owning and operating venture.

The name Maran was an amalgam of the names Maria and Anthony, honouring his parents, and later the brand was also adopted for the tanker and dry bulk fleets, now managed by Maran Tankers and Maran Dry respectively.

True to his strategy, Angelicoussis became the leading Greek shipowner in each of his chosen market segments – capesize bulk carriers, large tankers, particularly VLCCs, and large LNG carriers. When he died in 2021, the Angelicoussis Group group owned 151 ships across its three sectors of operation and was considered the largest purely private shipping empire worldwide.

His contribution to Greek shipping is widely recognised, not least through his group’s longstanding loyalty to the Greek flag and its strong support for maritime education in Greece. Business apart, he was deeply patriotic and concerned for the country and its people. In 2010 he decided to establish the Charitable Foundation Antonios and Ioannis Angelicoussis, aiming to help those in need in Greek society. Since its establishment, the Foundation has provided substantial support to children, hospitals, and schools in Greece.

Paul Ioannidis was a senior and trusted aide of Aristotle Onassis and his daughter Christina and he served for many years as Vice-President of the Onassis Foundation that continued the tycoon’s shipping business.

He has been widely recognised throughout shipping for his contribution to the industry, chiefly through championing a new safety culture that he brought with him from aviation.

Ioannidis grew up in Athens and fought with the Greek Resistance during the Second World War.  Although his early dream had been to go to sea and to train as a naval cadet, in the latter stages of the war Ioannidis trained as a fighter pilot and, after the war, he joined TAE Greek National Airlines, becoming at the age of 25 the youngest captain in Greek civil aviation.

In 1957 the company was acquired by Aristotle Onassis and renamed

Olympic Airways. For Olympic he served as chief instructor and chief pilot, eventually becoming the airline’s director general. He was also pilot of choice for many Greek and international VIPs.

After Onassis’ death, the mutual regard of the two men was reflected by the magnate’s will, which appointed Ioannidis a lifetime member of the board of the Onassis Foundation that Onassis wished established to continue his business as well as fund a variety of public benefit causes. The other half of the estate was left to his daughter Christina.

Ioannidis served as chief executive of the foundation’s shipping and other commercial operations, and he also served as president of all companies owned by Christina Onassis for whom he acted as a father-figure and mentor.

With more than 25 years of experience as an instructor on airplanes and simulators behind him, Ioannidis was quick to identify that the safety culture in the maritime industry lagged behind that already being applied in aviation, especially when it came to addressing weakness of the ‘human element’ that was the main cause of most accidents.

He introduced superior aviation training methods and culture to shipping to systematically reduce human error. The so-called ‘airline concept’ was applied first at Olympic Maritime and later the pioneering initiative was shared with the wider Greek shipping community, through the Union of Greek Shipowners (UGS) and the Hellenic Marine Environment Protection Association, Helmepa.

The approach to safety and training he introduced spread beyond Greek shipping and even as far as major oil company fleets that copied the systems he introduced to the Onassis fleet. As a whole, the shipping industry did not catch up until the 1990s when the International Safety Management Code was introduced. There was international recognition for Ioannidis’ ideas and his achievements.

Ioannidis was a member of the board of the UGS for 26 years, six of these as Vice-President. He chaired the UGS training committee for 14 years. He also served as vice-president of Helmepa and headed its training committee.