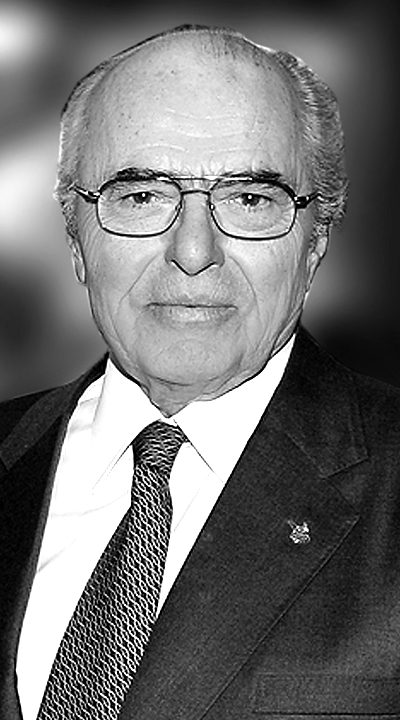 IT IS hard to think of shipowners who have left an entirely positive legend. Few can be said to have earned widespread affection outside the shipping community as well as within it. Yet Captain Vassilis C. Constantakopoulos, known almost universally as “Capt. Vassilis”, was an exception.

Born in 1935 in the village of Diavolitsi, he grew up in the Messinia region of the Peloponnese during the difficult years of the Occupation and the bitter Greek Civil War. He used to say he did not see the sea until he came to Athens in 1948. He graduated from night school in 1953 and began his shipping career in the same year when he took a berth as a deck boy on an elderly freighter leaving Piraeus.

He rose to the rank of master and in 1974, after the birth of his third son he came ashore – to be closer to his wife, Carmen, and their children. Initial business ideas included opening a grocery. But instead he acquired his first ship, an old vessel that he renamed Carmen, and he established his own company, Costamare Shipping Co. S.A.

Costamare began its existence with tweendeckers, cement carriers, and various types of bulk carrier. The company and its owner emerged from the shipping crisis of the early 1980s with enhanced reputation and became a pioneer for a Greek presence in container shipping. Capt. Vassilis was quick to grasp the potential of containerisation as the fastest-growing sector for transporting cargo by sea.

As a charter-owner, Costamare had to break into liner industry circles which in those days were almost exclusively a US and North European club. In doing so successfully, and demonstrating a high level of technical reliability and customer-service, Costamare established a model for an increasing number of Greek owners active in container shipping today. He led the company at one point to be the largest independent charter-owner in the world.

He had correctly predicted that a Greek shipowner could provide a useful complement to Northern European owners by acquiring their older vessels then chartering them back to the seller, while he could operate such vessels more efficiently and cost-effectively. Costamare gravitated from exclusively secondhand vessels to newbuildings in the 1990s and the company duly became the first independent owner worldwide to place orders for post-panamax newbuildings.

Capt. Vassilis’ interest in China was a catalyst for a general increase in maritime cooperation between Chinese institutions and Greece during the last decade of his life. In 2000, he founded the Center for Hellenic Studies of Peking University in China along with his wife.

He lived to see Costamare Inc. go public when the company was successfully listed on the New York Stock Exchange in November 2010.

In addition to the many achievements of Costamare, Capt. Vassilis made a much wider contribution to the shipping community and to Greece’s economy and society.

Always interested in enhancing Greece’s tourism product, he invested in and financed a number of tourism developments even as he worked on his private vision of creating a deluxe, environmentally-friendly tourism destination in his native Messinia region.

The project was the flagship of his constant efforts to preserve, promote and give back to his homeland. Based on land purchased plot-by-plot over a period of two decades, it included several resorts and golf courses, among the first of international standard in Greece. The dream was realized in 2010 when Costa Navarino’s first area was opened and it has already become one of the most acclaimed tourism destinations in the Mediterranean, bringing much-needed jobs and income to the Peloponnese.

Following a proposal by regional prefects and local mayors, in 2012 the authorities renamed the region’s main international airport in his honour: Kalamata Airport ‘Captain Vassilis Constantakopoulos’.

He also founded Costacruising, a leisure craft business employing two luxury motor yachts built in Greece. A third business, Geohellas, was set up to exploit fine clay deposits in the Prefecture of Grevena. It constructed a plant for the processing and packaging of materials with a wide range of industrial applications.

He was a founding member of the Association of Greek Tourist Enterprises, the Vryonis Center, the Messenian League, the United Hellenic American Congress, and the Pylos Archaeology Foundation. He served on the board of the National Bank of Greece and contributed his wisdom to other causes and businesses too numerous to mention.

Within the shipping community, Capt. Vassilis served on the boards of the Greek Shipowners’ Association, the Hellenic Chamber of Shipping and DVB NedshipBank, and as vice-chairman of the Swedish Club and chairman of the Hellenic Committee of Germanischer Lloyd. He remained a lifelong champion of the Greek flag, the Greek seafarer and a consistent voice of conscience for the community. He was the major financier of the Hellas Liberty project which has brought the last surviving Liberty vessel to Greece and renovated her for a floating museum.

Capt. Vassilis, having been involved in the environmental movement since the early 80’s,has a special place in the development of the Hellenic Marine Environment Protection Association. Alongside HELMEPA’s founder George P. Livanos and its lifelong director-general Dimitris Mitsatsos, he has been the most important figure in the history of the association, acting as three-time chairman as well as chairing the international league of similar societies, INTERMEPA. Apart from George Livanos, he was the sole person to hold the title of Honorary Chairman. More importantly in his own eyes, he was the founder and principal benefactor for more than 15 years of HELMEPA Junior and was personally involved with the children who visited Junior’s offices and environmental exhibit hosted on the ground floor of Costamare’s office building.

Many children grew up with fond memories of the shipowner, while many adults cherished their encounters with a personality who combined wisdom, kindness and an unspoilt manner.

When Capt. Vassilis died, journalist George Skordilis wrote: “Over the years, Capt. Vassilis – precisely because of the way he worked as a human being – surpassed the narrow limits of the shipping industry and developed into national capital for Greece”.