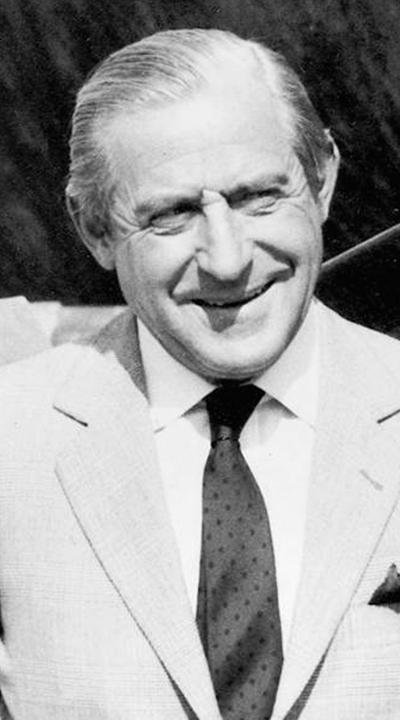 No Greek shipowner has been more driven, nor more refined in his tastes, than Stavros Niarchos, the great rival of Aristotle Onassis. Together with Onassis, he was the original ‘Golden Greek’, a description which was eventually applied to a generation of dynamic shipowners from Greece who were particularly inventive in surfing the post-Second World War boom in demand for sea transportation.

He outlived Onassis and he also outdid his rival in terms of fortune and the size of his fleet, even though in the eye of the public he was sometimes upstaged by his former brother-in-law.

Stavros Niarchos was born in 1909, the son of Spyros Niarchos and his bride Evgenia Coumandaros, both originally from Sparta. Spyros had joined the wave of Greek immigration to the United States in the late 19th century and had become moderately successful as a partner in a restaurant and confectioners in Buffalo, in the state of New York.

After he married Evgenia, the couple settled in the US but returned to Greece to have Stavros, their second child. In Greece, Spyros financed an expansion of the grain trading business of his wife’s family. Together with his brothers-in-law he built a flour mill in the port of Piraeus. But while Stavros was still in school, his father lost all his money speculating on the Athens Stock Exchange, forcing him to take his son out of private school. His father’s shame, and the sudden drop in the family’s standard of living, made a profound impact on Stavros, giving a keen edge to his ambitions. In his own business dealings, he never failed to protect himself against the worst risks.

Although Niarchos eyed going to law school, it is doubtful if he ever graduated as a lawyer. The family needed the money, so he went to work at his uncles’ flour mill in 1928. He rose in their esteem, even though he also became well-known for enjoying the night-life of Piraeus and Athens. After a spell at a shipping agency in Piraeus, he became increasingly interested in shipping and he urged the Coumandaros clan to buy their own ships in order to reduce their costs in shipping grain, principally from Argentina.

In 1935 he finally convinced them to purchase six 9,000-ton British freighters available at a bargain price. It is said that the profit on the first voyage came close to half the price they paid for the vessels. While he did not gain much personal benefit from the increased profits that the fleet brought to the milling business, Niarchos was ready to seize his opportunity as the countdown began towards the Second World War. He bought a majority stake in one of the Coumandaros freighters, the Maleas, and insured it for the absolute maximum amount.

In 1940, in London, he married Melpo Alexandropoulos, daughter of a minor Greek shipowner. Both had been briefly married before. The couple voyaged to New York, but not before he had collected the insurance proceeds from the loss of his first cargo ship, which was sunk in Antwerp harbour by German bombers. In the US he began shopping for further vessels and purchased a number of bargains. During the Second World War, a total of six of his vessels were sunk by German submarines but all his ships were heavily-insured and Niarchos came out of the war richer than he went into it. During the war, he served in the Greek Navy and for a while was also an assistant to the naval attache at the Greek Embassy in Washington. Although he was at sea for a time, it is not clear whether he saw action, as has been suggested, in the Normandy invasions. What is certain is that he made sure that his military duties did not prevent him from attending to his business affairs even while war raged.

Along with Onassis and Manuel Kulukundis, the Chairman of the Greek Shipowners New York Committee, Niarchos was one of the most prominent voices arguing for the transfer of wartime Liberty vessels to Greek ownership. Largely thanks to his losses during the conflict, he was successful in obtaining rights to purchase two of the total Greek allotment of 98 Liberty Ships and afterwards he went after surplus Liberty and Victory freighters and T2 oil tankers.

Emerging from the war, Niarchos had been slightly behind Onassis in both shipping and romance. Onassis had already ordered the world’s largest tankers prior to the outbreak of the war. In 1946 Onassis married Tina Livanos, youngest and most coveted daughter of Stavros Livanos, the most important Greek shipowner of his day. However, less than a year later, the newly-divorced Niarchos married Evgenia, Tina’s elder sister.

In shipping circles, he was regarded as a man in a hurry as he rapidly accumulated secondhand freighters. Niarchos started off by shipping coal to Europe but he predicted that demand for oil would boom in the post-war world and switched his main focus to tankers.

It was not long before he began to order brand-new ships that were bigger than their forbears and offered economies of scale. Shipbuilders were chosen largely on the basis of the cheapest prices that could be secured. In 1949, he ordered 10 from needy yards in the UK. He soon followed Onassis in turning to the ruined shipyards of Germany as well as placing contracts with builders in the Netherlands and Sweden.

During the coming years, he vied with Onassis and American-born magnate Daniel K. Ludwig to build the world’s largest tankers. In 1951, his 31,745-ton World Unity laid claim to the largest in the water. Niarchos could reclaim the title in 1954 with the 45,509-ton World Glory and again take it back from Onassis with the 47,750-ton Spyros Niarchos. Driven by Niarchos and his main rivals, the size of tankers doubled during the next decade. By 1962, he was able to take delivery the 114,668-ton SS Manhattan, again the world’s largest tanker.

Throughout his career, Stavros Niarchos insisted on quality and paid for it. He was known for offering his managers and his Greek, German, British and Italian crews better wages than most of his competitors. The ships he built were of high-specifications for their time and with lavish living quarters for seafarers. However, the Manhattan, the largest merchant ship built in the US, was a white elephant from the start. The Bethlehem Steel yard at Quincy, Massachusetts, created possibly the most sturdy leviathan afloat, but it was not optimised for carrying oil. Needing a crew of more than 50, and more than the usual fuel to power it, the tanker would struggle to break even and was sold less than a year later. It would later carve a place in history for itself when it was selected on the basis of its size and thick steel plating for conversion into an ice-breaker to test the viability of tanker voyages through the Northwest Passage. In 1969, the Manhattan became the first merchant ship to transit the Arctic route.

But Niarchos rarely made mistakes with shipping projects. It is said that he built the Manhattan from the start as a tax write-off. At the time, he held six T-2 tankers under US flag and American regulations required that in order to put them under cheaper flags, he would have to replace their capacity with vessels of the same or greater tonnage. The enormous tanker was cheaper than building several smaller vessels.

Stavros Niarchos was one of several top Greek shipowners, including Onassis, who circumvented the spirit of the 1946 Merchant Ship Sales Act by which the Americans wanted to keep the vast majority of merchant ships built during the war for American buyers.

To qualify, Niarchos had established the North American Shipping & Trading Co., which technically was controlled by American citizens, including his sister. Altogether, his companies acquired 14 tankers and freighters under the US flag. In the early 1950s, against the sensitive backdrop of the Korean War, Niarchos found himself indicted by the US Justice Department and his US-flag vessels were seized. He quickly settled the case by agreeing more than $12 million in fines and ordering several new ships from American shipbuilders.

Niarchos was counted as one of the first shipowners, along with Onassis, to build series of ships financed by major banks and insurance companies based on long-term charters with major oil companies. He was also one of the leaders of the move to international registries. In 1948 he put the first ever vessel in the newly-created ship registry of Liberia – the tanker World Peace.

He was a believer in long-term employment with the oil companies, although when the oil majors began to pay less lucrative rates in the 1960s, he considered selling off his tanker fleet. Although he had an enormous fleet of more than 80 vessels as late as the early 1970s, Niarchos had no regrets about reducing his involvement in shipping once harsh times struck in the 1970s and 1980s. He invested more in passions that included diamonds, race horses and art.

Stavros Niarchos became a heavyweight collector in the art world, particularly after his 1958 acquisition of the extensive collection of the Hollywood actor Edward G. Robinson, well-known for his gangster and tough-guy roles, which included possibly his best performance in 1941 as a tyrannical ship’s captain in ‘The Sea Wolf’. Niarchos bought numerous key works by Van Gogh, Picasso, Gauguin, Renoir, Degas, Toulouse-Lautrec, Cezanne and others. One of his favourite works was the 1585 Pieta by his countryman El Greco, acquired reportedly to celebrate the 1954 New Year. He ended up with arguably the world’s finest and most valuable private collection. He also diversified into real estate and stocks, becoming a significant shareholder in Citibank and other companies.

He commanded an organization capable of implementing his business decisions while he himself remained constantly on the move between homes in several countries. He was an addicted skier, enjoyed going on safari in Kenya, where planes would deliver his personal mail and teams would dig swimming pools wherever his group camped. A keen swimmer and sailor, he also had what were regarded as the finest yachts of their time, the 190 ft sailing yacht Creole and its successor, the steel motorised super-yacht Atlantis. At 385 ft, the Atlantis was the world’s second-largest yacht, behind Queen Elizabeth’s 412 ft Britannia, but it was 60 ft longer than Onassis’ celebrated Christina.

Atlantis and in 1981 its successor Atlantis II were both built at Hellenic Shipyards. Niarchos established the shipyard in 1957 and turned it into the biggest shipyard in the eastern Mediterranean. Eventually, in 1985, when the yard became uneconomical due to government restrictions and overmanning, he sold it to the state. He invested in a number of other Greek industries, including a participation in the Aspropyrgos Oil Refinery and an alumina company, but his most ambitious plans, put forward during the military dictatorship in Greece during the late 1960s, never came to fruition.

In 1965, he caused a mild sensation when, at the age of 56 he married Charlotte Ford, the 24-year-old daughter of Henry Ford II, the American automobile giant. They had a child together but the marriage did not last long and he returned to Evgenia. However, she died from an overdose of sleeping pills in 1970 in circumstances that warranted an investigation. Niarchos then married her sister Tina, recently divorced from Onassis. But she died from an overdose in 1974.

Although in later years Stavros Niarchos spent lavishly on his hobbies, he also gave to charity. For example, in 1979 he donating $5 million to Cornell Medical Center to cover the expense of heart surgery carried out on Greek children. He died in Switzerland in 1996 and was buried in a family plot in Lausanne.

Today, the patriotic part of his legacy is being promoted through the Stavros Niarchos Foundation. The foundation’s flagship project will give Athens a new national opera house, library and major park. It has already committed €100 million to health, welfare and education to help combat the effects of Greece’s current economic crisis.