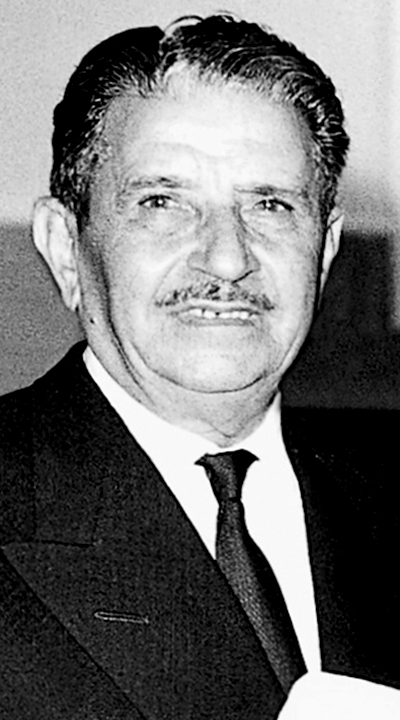 Before the Livanos family began its expansion in the early 19th century, led by Stavros G. Livanos, the village of Kardamyla in Chios was not as prominent a shipping and seafaring centre as it became in the latter part of the 20th century.

To a great extent it was George S. Livanos who became the icon for other natives of Kardamyla to follow, and he established the model of the classic Chiot shipowner, known and respected in the shipping industry today.

Born in 1887 as the third son of George Livanos, who established the family business on a modest scale with sailing barques, Stavros G. Livanos went to sea for the first time when he was about 10 years of age and worked aboard ships as a teenager. But he also appreciated from an early age that steamships were the future. He decided to study engineering and reputedly at the age of 19 became the youngest chief engineer in the Greek merchant marine.

When, in 1907, the family acquired its first steamship, the Theofano Sideridou, he served as first engineer although he later became a first officer and master. During his youth, Chios and other Greek islands of the eastern Aegean remained part of the Ottoman Empire and had not yet been united with the new Greece. Like many Chiots, Stavros Livanos was strongly patriotic and this was underlined in 1912 when he volunteered for the Greek navy at the outbreak of the First Balkan War. He served until war’s end and, according to some reports, was wounded in the first year when the Greek fleet was instrumental in freeing the island of Lesbos. After the Balkan conflict, he joined the shipping business with his older brothers, and they began to gradually expand their fleet of steamships. This process speeded up after Stavros Livanos was selected to open a London office for the family during the First World War. The firm of S. Livanos & Co. was a keen buyer of steamships during the 1920s.

From the start of his career, Livanos was renowned for his single-minded pursuit of ships and his frugality. Wealth preservation became a priority to sit alongside his religious beliefs, to be pursued with almost the same fervor. “Cash and ships” were what he put store by in his business, and throughout his career he acquired only the ships that he could afford from his pocket, and did not take loans to finance his fleet.

Despite concentrating on his business, and travelling extensively, often with his own ships, he found time to meet and marry the love of his life, Arietta Zafirakis, daughter of a respectable merchant, and they had two girls and a boy together.

The Great Depression found him cash-rich and not indebted to the banks like many of his competitors. He put his money to good use as a surplus of ships came onto the market when their owners were forced to sell. He was among the buyers of the Standard-type freighters recommended by Manuel Kulukundis in the early 1930s and he also ordered newly-built ships cheaply before World War Two, notably a series of nine 9,000-ton vessels from William Gray & Co. in the UK, which were all delivered in the period 1936-39. The last and largest of these, the 10,000-ton Georgios S. Livanos, was delivered just before war broke out.

In Autumn 1940, Livanos moved his family to Canada and they later moved to New York. During the war his brothers were arrested in Greece on suspicion of aiding the resistance, which only served to confirm his position as the driving force behind the Livanos shipping business. Although he remained a no-nonsense serious personality all his life, during the war in the US he found time to indulge his passions for playing bridge and golf. Although well on his way to becoming one of the richest men in the world he was famous among friends for not wanting to bet more than the smallest amount at either game.

On the eve of the war he had amassed a fleet of about 30 cargo ships, but the war took a heavy toll on the fleet. Partly as a result of the company’s losses during the war, after the war Livanos acquired the highest number of Liberty ships accorded to any Greek shipowner – 12. This huge number was also testimony to the high status he already merited in Greek shipping circles.In addition to the Liberties, he was also permitted to acquire one of the seven T-2 tankers in the allotment of wartime vessels to Greece.

Livanos thus had a large fleet to benefit from the surge in demand for transportation in the years after the war and he added to this with further purchases of war-surplus vessels through specially-established American corporations intended to circumvent US regulations that reserved such ships for US owners. By the 1950s, he found himself under investigation by the US Justice Department for allegedly defrauding the US Maritime Commission, an accusation that was also leveled at Aristotle Onassis and Stavros Niarchos. All settled to put the affair behind them.

In 1946 and 1947 Livanos had given his consent to Onassis and Niarchos, respectively, to marry his two daughters, establishing an extraordinary trio of shipowners who were now linked by marriage. However, Livanos was a different personality from his two newly-acquired sons-in-law. He frowned on what he saw as their excesses, including their innovations in mortgaging their ships to financial institutions in order to finance their huge ship construction projects. He was not interested in the glamorous life or appearing to be fashionable. He also shunned publicity whereas, at various times, Onassis and Niarchos courted it.

Despite his reliance on his own cash, he never lagged very far behind them as the trio became three of the biggest shipowners of the 1950s. He also followed them into tankers.

Among his later newbuilding projects were a long series of 24,000-ton freighters built in the Split and Uljanik shipyards of the former-Yugoslavia, and various tankers in Japan, including the 80,806-ton Stavros S. Livanos, which was named just a few months after his death from a heart attack in 1963 at the age of 76.