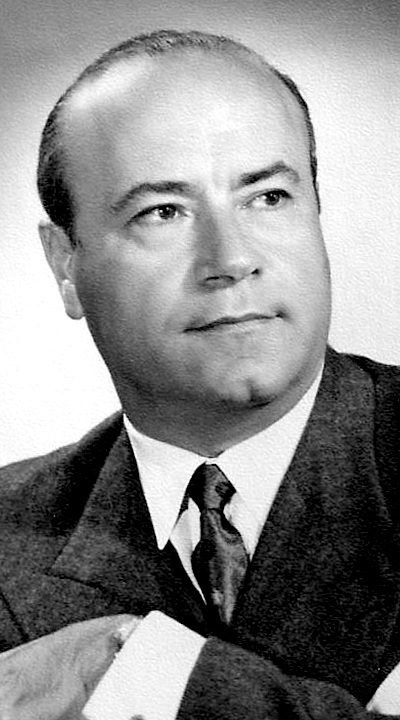 The rise and fall of Stratis G. Andreadis is a story that has many of the traits of ancient Greek tragedy: heroism and hubris, a struggle between the individual and the state, and a case study in civic responsibility.

He is one of the most controversial of Greek shipping’s great personalities, mainly because his era as leader of the country’s shipowners coincided with the military dictatorship of 1967-1974.

Prof. Andreadis came from an upper-class family of Chios shipowners and seafarers who controlled a number of brigantines and schooners in the 19th century before quickly making the transition to steam.

He became one of the most dominant figures in the politics of Greek shipping during the modern era. But he was a true ‘Renaissance man’: in parallel to his shipowning activities, he was outstanding as a banker, and an important industrialist, as well as achieving success as a lawyer and an academic.

The third child of George and Polytimi Andreadis, he went to school in his home village of Vrontados in Chios, and thereafter attended the Chios High School, where he excelled as a student. His brilliance was confirmed when he graduated from the Law School of Athens, at the age of 20.

He began work as an attorney in 1927. He received his post-graduate diploma and doctorate in Paris and by 1934 he had the authority to appear before the Supreme Court. During the 1930s he distinguished himself as a lawyer handling major civil, criminal and administrative law cases. In 1939, he was elected Professor of administrative law at the University of Thessaloniki and thereafter Professor at the Athens University of Economic and Business Sciences where he taught students for the next 30 years. Eventually, he also served as Rector at the AUEB. The importance he attached to academic activities is illustrated by the fact he enjoyed being addressed as ‘Professor’ throughout his life.

He was a writer as well as teacher. He published a number of books during his career on subjects of law, economics and social development, not only related to Greece but to global trends. Prof. Andreadis was considered an expert in the country’s constitutional and administrative law, and he had a special interest in administrative justice and state intervention in private activity. Ironically, these two issues would haunt him at the end of his career.

His first major management role came in 1941 when he was made managing director of Hellenic Electric Railways, in crisis due to the wartime Occupation of Greece. After the Second World War, he led the urban railway company, which was under the wing of the Andreadis Group, to expand its service and he remained associated with it for three decades.

As a shipowner, he was a dominant personality in Greece-based shipping circles during the decades after the Second World War when the industry needed rebuilding. He served for 10 years as Vice-President of the Union of Greek Shipowners and then another 15 years (from 1960 to 1974) as the President of the UGS.

His reputation has suffered as an apparent supporter of the military dictatorship that seized power in 1967. There is no doubt that he himself was autocratic and egocentric by nature and that he did not always observe the democratic niceties even in his running of the UGS. But at the same time he enjoyed the repeated support of a number of traditional shipping families, and his legacy would serve Greek shipping well for decades to come.

It was during Andreadis’ term of office that a friendly legal and taxation regime for shipping companies and marine service organisations was established in Greece. Although ratified by the military junta, the legislation had first been drafted during the centre-left government of George Papandreou, the first of the three Papandreous to serve as Greek Prime Ministers.

Based on this new, secure legal framework for shipping that he had helped to negotiate, Andreadis was able to persuade a number of expatriate Greek shipowners to relocate to Greece. It was the start of Piraeus’ new success as the modern headquarters of the Greek shipping industry.

His own shipping business started off after the war with the acquisition of two Liberty ships. Shortly afterwards, he was among the first Greek shipowners to enter the oil trade, purchasing an American-built T-2 tanker. Thereafter, his Commercial Trading and Discount Co. ordered his first newly built ships from British and Japanese yards. During the 1950s the company took delivery of a number of brand-new steam tankers, motor tankers and freighters. By the end of 1957, the fleet stood at 14 vessels.

After the crisis of 1958, he embarked on a new programme to build motor tankers and dry bulk carriers and the deliveries continued through to the end of the 1970s. In 1971, he took delivery of his largest ships to date, a pair of ore-oil carriers of 150,000 ton capacity from the Hitachi Group in Japan. He also began to look at very large tankers, taking delivery of one 280,000 ton tanker in 1976. He had ambitions also to order an ultra-large tanker of 500,000 tons capacity which would have been the largest under Greek ownership.

In spite of Andreadis’ prominence as a shipping personality, he invested heavily in Greece’s on-shore economy. His involvement in other sectors brought his greatest achievements, as well as his fall.

In 1952 he acquired a majority stake in the Commercial Bank of Greece, then the country’s second largest commercial bank. He built it rapidly into the largest business group in Greece, importing many millions of dollars’ worth of foreign exchange into a country that was still trying to rebuild and develop after the Second World War and Civil War.

The Commercial Bank took over the Ionian and Popular Bank of Greece in 1957 and further expanded during the early 1960s by buying the Bank of Piraeus and the Bank of Attica. In 1962, he established the country’s first investment bank – Investment Bank S.A. – with 10 large international banks, including the likes of Bank of America and Barclays, as participants.

Between the end of the 1950s and 1975, the group had tripled its bank branches and pioneered mobile banking with a fleet of 45 buses to bring banking services to small towns and remote villages around the country. It was a pioneer of electronic data processing in Greece and introduced a significant amount of automation to the banking system as early as the 1970s. The group also expanded with insurance companies and Greece’s first mutual fund, as well as the landmark tourism project of building the Athens Hilton.

Andreadis established Elefsis Shipyards, which he also supported with shipbuilding contracts for his own fleet. In the end, he took delivery of four newly-built dry cargo vessels from the yard. Andreadis also founded a significant ship repair yard, the Phosphoric Fertilizers Industry and there were numerous other financial and industrial initiatives.

After the 1972 oil shock, the military government invited offers to build and operate the country’s fourth oil refinery and Andreadis won the contract. A new line of business for his empire, the Stran refinery at Megara, not far from Athens, was reputed to be a $100m investment when fully complete. However, it was aborted before it was built and although Andreadis was vindicated in court decisions it was two decades before his family was compensated, thanks to the European Court of Human Rights.

Worse was to come. In 1975, after the fall of the junta and the return of democracy, Prime minister Constantine Karamanlis abruptly nationalised the Commercial Bank of Greece Group, including virtually all Andreadis’ onshore businesses of note, without compensation. In earlier years the politician and the businessman had been close. Although the friendship had soured, it appears that Andreadis was unprepared for the attack on his empire.

Years later, Andreadis could positively compare the benefits that his private investments had brought to Greece with the disastrous performance of his businesses after they were taken under public control. The appropriation of his group set a precedent for further nationalisations in years to come that played a role in discouraging international investment in the country.

He would spend most of his remaining years effectively in exile, mainly in Paris. Although he had some interests abroad, notably the London-based Commercial Bank of the Near East, which was later sold to Alpha Bank, he was left mainly with his shipping business.

Like other shipowners who invested heavily during the 1970s, he was also negatively affected by the global shipping crisis of the 1980s. By the time of his death in 1989, the fleet had shrunk to a handful of ships.

Without doubt, his troubles with the state, coming at an advanced stage of his life, had been a bitter blow to Andreadis’ pride and fortune. Yet right up until the end, according to associates, Andreadis would gladly have returned to invest in Greece if circumstances encouraged it.