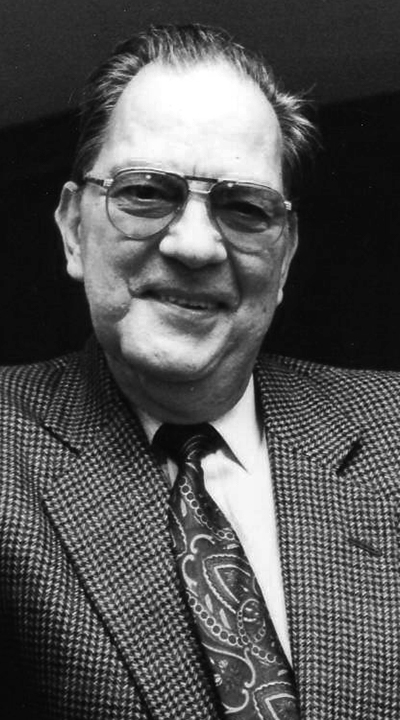 Nico J. Cotzias is the first member of the Greek Shipping Hall of Fame to be inducted as a non-shipowner.

He is most often recalled as the co-founder and President of the Piraeus Marine Club, an image that combined his work for the shipping community with his own pleasure in entertaining and good company. But this was just one of the avenues his tireless work for Greek shipping took.

The Cotzias family, originally from the small northern Aegean island of Psara, about 13 miles north-west of the northern-most tip of Chios island, first entered shipping about the time that the Greek state was born. Later, they settled in Syros, the Cycladic island that was the 19th century capital of the country’s shipping industry.

It was there in 1893 that the third generation of the family opened a shipbroking office under the name N. D. Cotzias. In 1912 Nicholas D. Cotzias shifted the firm to Piraeus, which was rapidly becoming the new centre of the nation’s maritime business.

Nico J. Cotzias was born in Piraeus and he developed a vision of establishing Piraeus as a world-class services hub and its famous Akti Miaouli as shipping’s equivalent of Wall Street.

He was educated in the US and the UK as well as Greece and joined the family shipbroking business after the Second World War. He worked for the firm until his retirement in 2000 with the exception only of his period of service for the Royal Hellenic Navy from 1950 to 1952.

After returning to civilian life, in 1955 he married May Tambacopoulos, the daughter of one of Greece’s leading legal clans. They had three children – Sophie, Joanne and John – and six grand-daughters.

By 1965, Cotzias had become President of N. D. Cotzias Shipping and was poised to embark on his most energetic and productive years.

The following year, in May, he acted as the broker when Union Commercial Steamship Company purchased a tanker from Stavros Niarchos. To celebrate, the main parties to the deal gathered in the bar of the Athens Hilton for a drink, or perhaps two. Present together with Cotzias were the buyers, Mark Scufalos and Nicolas Joannides of Union Commercial, Constantinos Xenos representing the Niarchos organisation, and Albert A. White, then surveyor for American Bureau of Shipping in Greece.

The five felt that it was a pity there was not a similarly pleasant social haunt for business in Piraeus and they used the back of the Hilton bar tariff to pledge “not less than” 200,000 drachmas (the equivalent of about $50,000 today) to help set up the Piraeus Marine Club.

This was duly achieved in 1968 with the help of a few initial members, and the support of the National Bank of Greece and the First National City Bank of New York, later renamed Citibank.

Xenos was the initial president and Cotzias did not join the board until 1971, as treasurer. Thereafter, he became the most vibrant personality in the club’s history, serving one term as Vice-president followed by his election as club President a record four times.

The same year that the Marine Club became reality, a branch office in the UK was opened for the family business. Located in Eastcheap, the office for the next two decades built on Cotzias’ ties with the City of London and was active in chartering, insuring vessels with Lloyd’s and ship finance.

Cotzias was also instrumental in establishing the Hellenic Shipbrokers Association in 1975. He was on the steering committee launched in 1973 and was elected the HSA’s first President in 1976. He was re-elected for three more terms after that, heading the association until 1981.

The Cotzias firm had been known for its “casual and friendly” manner of doing business with clients as far back as its days in Syros. This tradition, together with his strong ties with London shipbrokers, made Cotzias an enthusiastic and trusted champion of the shipbroker’s profession during its fledgling years in Greece. He was particularly keen that brokers should receive a proper education in the business and conform to an ethical code in their transactions.

He also became the President of FONASBA, the Federation of National Associations of Shipbrokers and Agents. In 1976 he became the first Greek board member of the Baltic and International Maritime Council (BIMCO), the world’s largest shipping association. He served as Vice-President from 1981 to 1985 and he remained a member of the organisation’s board of directors until his death more than 20 years later.

In spite of the many developments in Piraeus during the course of his career, there were also frustrations. He had hoped for the creation of a local shipping stock exchange, as well as a freight exchange to compare with London’s Baltic Exchange. But these were dreams that were not realised, at least in his lifetime.

Cotzias was also an enthusiastic member of the British Hellenic Chamber of Commerce. His firm’s longstanding services as Admiralty Agents for the Royal Navy, together with his ceaseless promotion of British-Greek relations, particularly in the field of shipping, earned Cotzias a 1994 Order of the British Empire (OBE) from Queen Elisabeth II.

While he was best-known as a shipbroker and a champion of creating a ‘cluster’ of maritime services in Piraeus, Cotzias was an investor in vessels and other related businesses. In the 1960s, for example, he helped create a joint venture together with tug companies Smit-Lloyd of the Netherlands and the Greek firm of Loucas Matsas. This served the Prinos oil field in northern Greece for many years.

Together with younger brother Antonis, he invested in a first freighter as early as 1948. But shipowning was secondary in his career and ships were purchased occasionally with other partners. Two more acquisitions followed in the mid-1960s.

In 1972, Cotzias and friend Captain John G. Goumas, a future President of the Union of Greek Shipowners, were founding partners together with Torben Jensen and Joe Danesboe of Copenhagen-based Armada Shipping Aps, which traded as Clipper. They remained shareholders until the 1980s. The cooperation with J.G. Goumas Shipping extended to two newbuildings, a Freedom-type general cargo ship and a Freedom MkII, built by IHI in Japan in 1976 and 1980 respectively.

He was actively involved in numerous other shipping bodies, including the American Bureau of Shipping, Det Norske Veritas, the Union of Greek Shipowners, the Hellenic Chamber of Shipping and the Propeller Club.

Cotzias retired in 2000, leaving the firm in the hands of a fourth generation of the family active in the industry. He enjoyed numerous long-standing hobbies, such as making model trains and ships, photography and his film collection of more than 8,000 titles, until he died in 2009.