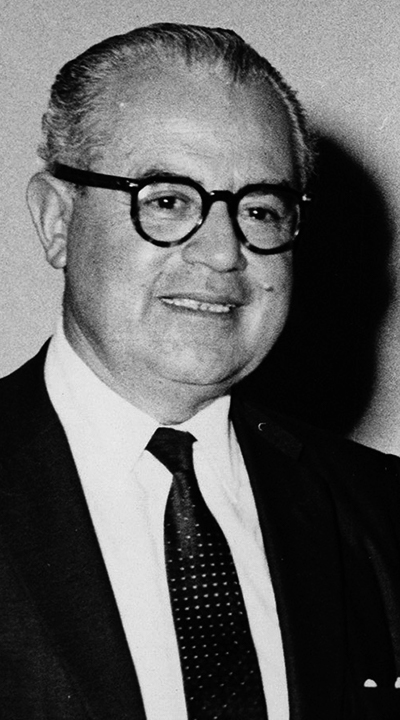 Manuel, or Manolis, Kulukundis enjoyed special status in the Greek shipping community of the 20th century. He was widely seen as a mentor for younger shipowners, and sometimes hailed within Greek shipping circles as their ‘patriarch’ or even ‘rector’.

Pipe-smoking, thoughtful and an accomplished watercolour painter, Kulukundis had a genial image and a charming manner. He could also entertain as a capable player of the mandolin. This partly obscured a strong business personality who was not shy about taking the lead. Kulukundis was born on the island of Kasos in November 1898. His father Elias, a member of the third generation of the Kulukundis family active in shipping, was a master who commanded his own ships. In the same month that Manuel was born, his father sold his last sailing vessel, a 900-ton barque named Anastasia, and purchased his first steamship, a second-hand English freighter of 3,800 tons. “I belong therefore in the steam era,” Manuel later wrote. As a schoolboy he worked on his father’s ships during holidays, becoming a fanatical ship-spotter. He built up a vast store of knowledge regarding ship types, designs, builders and owners. Since his father was mostly at sea, he received the sales and purchase reports from shipbrokers. Scouring these on a daily basis enriched his awareness of the business with considerable data on deals and ship prices.

After finishing school in 1914, he had intended to start at the American University of Beirut but this plan was upset as Turkey entered the First World War on the side of Germany. After the war he made his way to London and learned more about the business as a trainee in a City shipbroking office. The following year, 1921, he joined with his compatriot and childhood friend Minas Rethymnis to found Rethymnis & Kulukundis. R&K gradually became the biggest Greek shipping office in London. It was something like a ‘one-stop shop’ for fellow Greek shipowners needing services in the British market. Unlike many of the early ‘London-Greek’ offices, it did not represent purely compatriots from its home island, in its case Kasos. It also represented a number of family shipping enterprises from Chios, and shipowners from other islands. As well as a friendly hand, for a fee it could provide loans, sale and purchase brokerage, chartering, insurance, bunkers and even ship management. Onassis and Niarchos were just two of the names that R&K helped during their early years. R&K’s first summer coincided with miserable conditions in the freight market and falling prices for ships. The time was ripe for ambitious Greek owners to buy steamships and a further source of cheap vessels was the sale of a large fleet of ex-German ships as war reparations, administered by Lord Inchcape of P&O. Kulukundis’ first deal as a broker was buying one of these, a 13 year-old, 6,000-ton steamer called Rooke for £17,000. It established his name in the Greek market as a specialist in tendering for the German war vessels, of which he eventually purchased eight from Lord Inchcape and another seven that had been seized by the Allies.

But it was thanks to the Great Depression, a decade after the establishment of R&K, that Kulukundis was able to do his best deals. The collapse of numerous shipping companies, included the Kyslant Group, which counted the Royal Mail Steam Packet Co. and Elder Dempster Lines among its operations, flooded the market with quite modern ships at rock-bottom prices. He led the move to snap up many of these ships, particularly the Standard B-type built at the end of the First World War, which could now be obtained for about £6,000. He also urged other Greek shipowners to take the opportunity. He later reported that some, such as Stavros Livanos, Goulandris Bros. and Chandris, followed suit. However, others preferred to buy conventional steamships. R&K purchased 25 of this type of ship for itself and for its clients.

Kulukundis considered that his leadership of this expansion of the Greek fleet, at the best possible moment, was the high point of his career. It included “the best swap” he ever made. In 1932 he sold a 1900-built, 6,000-ton old steamer for £2,100 and he sent the same crew to take delivery of his new purchase, the larger, 12 year-old Maindy Grange, which was to be renamed Mount Pindus. Barclays Bank sold it to him for £2,150, less than the scrap value for a vessel of 8,100 tons. It did not take very long to verify his eye for an opportunity. Prices recovered so rapidly thereafter that Greeks could sell some of the vessels they had acquired at multiples of the price they paid. R&K, for example, acquired the Mount Ida for £6,000 from Elder Dempster in 1933 and sold it to German buyers two years later for £54,000.

Although Kulukundis shone in the secondhand sale and purchase market, R&K also participated in a wave of Greek shipbuilding orders during the late 1930s. The Kulukundis family firm ordered four new cargo vessels, all of them from British yards.

The renewed optimism in the shipping market followed a move among shipowners of various nationalities to agree to a minimum rate scheme that was designed to restore charter rates to tolerable levels on the Argentina to Europe grain trade as of 1935. The initiative was proposed by Kulukundis who, the same year, also proposed greater coordination between the 21 Greek shipping offices established in London. By mid-1935, the Greek Shipping Co-operation Committee was born. Although Kulukundis never chaired the Committee, he had already established himself as the moral leader of the Greek community in Britain. He was the chief negotiator with the British government when it came to chartering Greek vessels for the Allied cause at the outbreak of the Second World War. According to Kulukundis, R&K was the most active buyer of second-hand tonnage up until the Second World War. In 1934 the group had established Counties Ship Management to manage the growing fleet and on the eve of the war it managed 38 vessels.

As the clouds of war gathered, R&K chartered 15 of its vessels to the Swiss government under a deal that included wise provisions for adjusting the rate of hire on a quarterly basis, and war risk insurance to be provided by the charterers. R&K chartered another 15 vessels to the British Ministry of Supply for the duration of the war and was the first Greek office to make such a major commitment. It was not until October 1940, once Greece entered the war, that all Greek ships joined the Allied effort.

Kulukundis went to the United States in June 1940, joining a growing band of expatriate Greek shipowners based in New York. He swiftly became the first Chairman of the newly-formed Greek Shipowners New York Committee which coordinated the affairs of the Greek merchant fleet, and support for its crews, during the war. One of his major initiatives was to persuade the US government, through the Greek Embassy, to allocate 15 newly-built ‘Liberty’ ships to Greece under the Lend-Lease Act of 1941. The Committee formed a corporation to run them and they worked for the Allied cause throughout the conflict. It was a vital episode in positioning the Greek shipping community for recovery after the Second World War. When Greece was allotted 100 of the mass-built Liberty ships under the Ship Sales Act of 1946, Kulukundis and other New Yorkers knew what the ships could do, whereas many of the conservative London-based shipowners remained suspicious of welded ships, particularly those turned out at indecent speed for the war effort. Kulukundis received the second-highest number of any Greek shipowner – 11 – although several of these were in partnership with other shipowners. The vessels were allocated partly on the basis of wartime casualties and the R&K fleet suffered a heavy toll, losing half its fleet.

Up until then, Kulukundis had enjoyed a charmed career. But the remainder of his life, spent mostly based in the US, was a story of mixed fortunes. Immediately after the war, the family diversified geographically and moved into the tanker trades. In a huge deal of 1947 a fleet of 58 former ‘Fort’ dry cargo vessels were purchased from the Canadian government, and were operated by Canadian based affiliates and Counties Ship Management. The following year, Manuel and cousin Basil Mavroleon launched London and Overseas Freighters (LOF). The new company ordered its first new tankers in 1950 and went public on the London Stock Exchange in 1951. Thereafter, although it held interests in dry cargo ventures at several moments in its history, LOF remained predominantly a tanker owner until it was taken over by Frontline, a company controlled by Norwegian shipping magnate John Fredriksen, in 1997.

Kulukundis was still a principal shareholder in R&K, which also began to operate tankers for the first time. For his US-based operations he also began to focus on tankers, including several large new tankers he ordered from shipyards with US government-insured loans in the 1950s. But he was also overtaken by a number of controversies during the 1950s and early ’60s. He was one of three prominent Greeks – Onassis and Niarchos being the others – who were indicted for purchasing US-flag vessels through dummy corporations.

All three were let off with moderate fines. That was before he became a naturalized US citizen in 1955. Kulukundis-linked ships traded globally. But some were prominent in supplying Cuba with oil from the Soviet Union as well as carrying sugar in the opposite direction, irking some Americans. An agreement not to carry cargo for Communist countries, struck with Senator McCarthy during the Korean War, was also politically controversial. In 1961, he entered a very different type of shipping business by purchasing 60 year-old Bull Line, an established US-flag operator with a fleet of eight cargo ships and a liner service to Puerto Rico that was also sought by Malcom McLean. A terminal in Brooklyn as well as property in Puerto Rico and 300 employees were included in the deal. Just two years later, Bull Line came to a halt and high overheads and mounting debt forced Kulukundis to file for reorganisation under Chapter 11 of the US Bankruptcy Code. By 1968, all his US-based shipping interests, including Seatrade Corporation, Kulukundis Maritime Industries, Tramp Shipping & Oil Transport as well as Bull Line, were declared bankrupt.

He remained active in shipping after that, but more quietly. He later wrote that R&K’s success before the Second World War “lay in our ability to take a quick decision and my knowledge of ships helped us to steal a pace on competitors.”

In fact he had a photographic memory, and this also enabled him to paint astonishingly detailed renderings of vessels seen many decades earlier. Rarely without his box of watercolours, he would paint almost anywhere, often in restaurants using the back of the establishment’s menu. He continued painting well into his 70s and 80s and his affectionate portraits of vessels, apart from being prized collectors’ items, are a valuable record of a bygone age of Greek steamships.