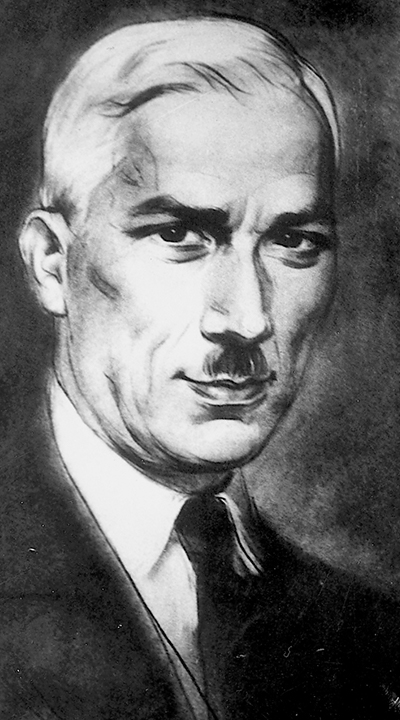 The Embiricos family has been in shipping for generations and can boast numerous significant maritime personalities. It was the dominant force in ushering the maritime community on the island of Andros from the era of sail to the age of steam and it also became a pillar of the London-Greek shipping community.

Leonidas A. Embiricos was among the key personalities in the family’s affairs in the first decades of the 20th century. His career combined shipping, politics and founding of important Greek financial institutions.

He studied commercial sciences in Romania. Together with his brother Michail, he trained in the offices of his uncle, Alcibiades Embiricos, a leading grain merchant and shipowner in the bustling Romanian grain port of Braila, on the banks of the Danube.

According to Augustus Embiricos’ ‘History of the Embiricos Family’, at the outbreak of the Greco-Turkish war in 1897 Leonidas rushed to join the Greek army. He served as a corporal in the Engineers and fought courageously in Epirus.

Thereafter, he established with his brothers an Embiricos Brothers shipping company in Syros. This was followed in 1908 when the brothers founded the National Steam Navigation Co. Ltd of Greece in Piraeus. Under the management, chiefly, of Leonidas and Maris, it became one of the largest companies of its day, with a mixed fleet of freighters, passenger ships and ocean liners.

Migration from Greece and other Mediterranean countries to the United States was a key social trend for both sides of the Atlantic, and potentially big business. National Steam Navigation became best-known for its fast, direct service between Piraeus and New York. It ordered several impressive newly-built passenger liners from British shipbuilders. The company’s marketing emphasised its Greek crew and Greek-style service on board in contrast to the ships of foreign competitors. Surviving posters featuring one of the handsome ocean liners with the Embiricos ‘E’ on the smokestacks are the most widely-known icons of Greek shipping from the early 20th century. Much of the surviving memorabilia features the first liner, the newly-built Patris, with the Greek flag waving at the stern. Launched in 1909, the 10,000-ton vessel provided economy-class accommodation for 1,300 passengers. A second, larger transatlantic liner, the 15,000-ton Macedonia, was added to the service in 1912. In the following two years the company acquired another two large liners, the 12,000-ton Ioannina and the 14,000-ton Thessaloniki, the latter a 2,000-passenger vessel that had previously provided a service from Britain to the US east coast as part of the Ellerman fleet.

Although it was the most important of the migrant shipping companies of its era, it was not the first. The Embiricos venture was predated by that of another Andriot-owned shipping line, founded by Dimitris Moraitis. However for a variety of reasons, Moraitis’ operation ran into trouble and in 1912 it was absorbed by National Steam Navigation. Two more large liners, the 15,000-ton Athinai and the 14,000-ton Themistoklis, were added to the fleet.

The company’s fleet had grown to seven substantial ocean liners, shortly to be joined by an eight, the King Constantine, under construction in Britain, as well as a number of subsidiary passenger vessels, providing local connections and ferrying passengers to the main embarkation ports for the transatlantic service. There were also six cargo ships with another two under construction.

It is estimated that in a 15-year period up to 1925, National Steam Navigation carried as many as 80% of the Greek migrants headed for America. The company was successful and as early as 1911 was able to more than double its initial share capital by bringing in new small investors in order to help fund its expansion.

But it was a volatile period and the enterprise was also interrupted by mishap and war. During the First Balkan War which flared in October 1912, the Macedonia – which was serving as an auxiliary with the Royal Hellenic Navy – was sunk in Syros as the harbour was being shelled by an Ottoman cruiser. The vessel was later raised but sold in 1916.

The 1889-built Themistoklis lasted not much more than a year in the Embiricos fleet. It suffered engine failure in December 1915 on a trip from Piraeus to New York and was eventually scuttled. The transatlantic service continued to function during the early stages of World War I, during which Greece initially remained neutral. However, it was eventually halted by Allied forces circling the Greek coasts. Greece did not officially enter the war until June 1917, but the company lost a number of vessels. One was the 3,600-ton freighter Frixos which went missing in Spring 1917 carrying wheat from New York to Manchester. It is presumed to have been sunk by a German submarine. Two further newbuildings, the ocean liner Queen Sofia and another passenger vessel Kilikia, were not delivered by their British builders because of the war.

While the company never received all the war indemnities that were due to it, this did not stop its expansion. Part of its growth after World War I came from an affiliate company in London, the Byron Steamship Company, established in 1917. The fleet was switched to British flag and the new entity, in addition to providing it with a commercial base in England, was eligible to acquire former German ships that were granted to the British as part of war reparations. Although a new ocean liner, Byron, was acquired in 1922, the 1920s marked a decline in the transatlantic service. National Steam Navigation had to face new foreign competitors, as well as moves by the US to limit the influx of migrants. By the end of the decade the Great Depression loomed. The company, which at its peak employed about 1,500 people, was wound up in 1935, after which Leonidas and his brothers operated freighters separately.

Extraordinarily, during the early years of the century when the family company had been in the throes of growth, Embiricos had also pursued an active national political role. He was a prominent supporter and friend of Eleftherios Venizelos, who served several terms as prime minister and is often seen as the maker of modern Greece. Embiricos was elected a member of parliament for the Cyclades three times in 1910, 1912 and 1915 and in 1916 he placed a National Steam Navigation vessel, the Esperia, at Venizelos’ disposal to take the leader and other top cadres to Thessaloniki where a temporary government was declared. He served a brief spell in Venizelos’ cabinet, as Minister of Provisions and Self-Sufficiency, overseeing procurement and food distribution among his various responsibilities. For a while he privately helped to supply the Greek army.

In his prime he was an important figure in the economic life of Greece beyond shipping. In 1918, he created the Bank of National Economy, as well as being a founder and director of two insurance companies, National Life and Good Faith. Two coal trading businesses were established in Aliveri and Oropos. Recognising the need for a top-class facility to serve the fleet needs of National Steam Navigation, he also led the family’s takeover of the Vassiliadis machine works and shipyard in Piraeus. It advertised new constructions, conversions and repairs with docking facilities for up to two vessels of 3,500 tons each.

His legacy included a number of significant donations and projects in his home island of Andros. In 1918, the government made him Commander of the Second Order of the Saviour.

Embiricos also worked to establish a national shipping infrastructure. In March 1916 he was a founder of the Union of Greek Shipowners. His status in the industry was such that he was elected as the first President of the UGS, and he held that position until 1920. He is regarded as one of the few shipping personalities in early20th century Greece to have a vision of the role of shipping in the development of the still-emerging nation. He said: “the war taught us that our independence, if not our existence, depends on shipping.” In the 1930s, Leonidas A. Embiricos relocated to Paris, where he died in 1948.