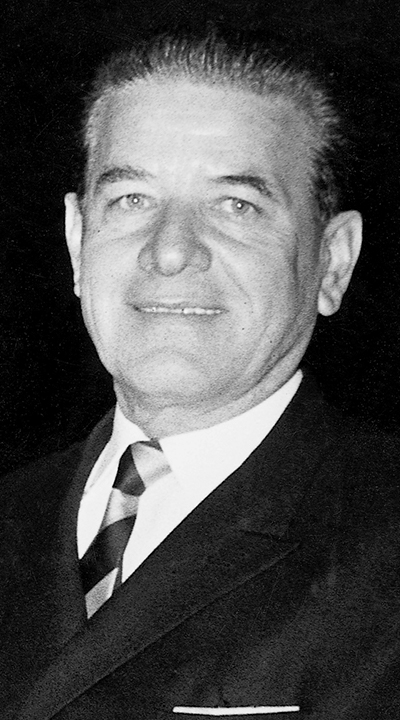 Born in 1910 in the region of Ileia in the western Peloponnese, John Latsis came from a poor background. His father, Spyros Latsis, was a grocer from Katokolon. Spyros married Aphrodite Efthimiou and the couple had nine children, of which John was sixth in line.

After he had become one of the world’s richest men, Latsis never forgot his origins. From 1967 onwards he established a scholarships programme for children and students in Ileia as well as funding other educational initiatives focused on his home region. He also considered himself a seafarer above being an oil, banking and property tycoon, as he later became. He cherished the title ‘Captain’. One of his trademarks was wearing a gold-braided captain’s hat, often in the company of monarchs, princes, presidents and prime ministers.

Among his first jobs were working as a baggage-handler in the port and a deck-hand on ships. His father died when he was about 19, reinforcing Latsis’ independent character. After military service in the Greek navy he tried to establish himself as a steamship agent, chartering broker, commercial representative and insurance agent for the ports of Pyrgos and Katakolon. His roving eye was also interested in tourism and, in the 1930s, the region’s trade in raisins and currants. He began as an intermediary buyer between the producers and the major traders but soon began to organise the small growers and offered warehousing facilities in the port that would allow him to choose a more advantageous moment to sell the produce.

At the outset of the Second World War, Latsis married Erietta Tsoukala and for nearly two years served once again in the Greek navy as Greece clashed with Italy. During the German Occupation of Greece, Latsis remained in Athens with most of the family. He was once arrested on suspicion of aiding Allied servicemen caught in Greece. He also tried a small pasta-making business in Athens but this came to an end in 1945 when a fire destroyed his premises and he had to start from scratch in the difficult post-war climate.

After the war, Latsis’ efforts to become a shipping entrepreneur were evident in several maritime sectors, starting with Greece’s coastal ferry links with the islands. Most of the fleet had been shattered duringthe war. For a period Latsis worked as a seaman on vessels of Evangelos Nomikos and at the end of the 1940s he appears to have purchased his first small passenger ship, the 60 year-old Effi, with a loan from the shipowner. A second small vessel, Niki, soon joined it on a Saronic Gulf passenger service. At the end of 1949, Latsis was able to acquire a third, much more modern motorship, the Laurana, from Malta Steamship Company. Renamed Neraida, the 18-knot vessel was a cut above others in the sector and consumed far less fuel than the slower, smaller steamships.

In the 1950s, he ordered his first newly-built passenger ships from Sweden and expanded the operation on longer routes, notably to Crete. He is also credited with introducing the first genuine fast ferry in Greece, the Express, which cut journey times in the Saronic Gulf by two or three hours. A few years later, however, he quit the coastal service to concentrate on the emerging demand for transporting migrants from Greece to Australia.

In 1959, he founded Latsis Line, buying the 30 year-old pair Highland Brigade and Highland Princess from Nelson Line. Renamed Henrietta and Marianna, they were converted with better accommodation but also with a view to transporting up to 8,000 tons of frozen meat on the return voyage from Australia. But the Chandris family was slightly quicker, launching the Chandris Lines’ service to Australia with the Patris, that was soon to be joined with a second ship. Judging that demand could not support both companies, he sold one of the two vessels and shortly afterwards the other was chartered to the kingdom of Libya. This established a service to the Saudi Arabian port of Jeddah to facilitate muslim pilgrims visiting Mecca.

It was a major step in what was to be an important relationship for Latsis with the Arab world. He was considered a pioneer among independent European businessmen in forging links with the emerging oil-rich nations of the Middle East. In the early 1960s, he dramatically expanded the passenger ship fleet with acquisitions from P&O, the Dutch government and American President Lines. His ships were carrying pilgrims from numerous muslim countries to Saui Arabia, and Latsis was poised to play a pivotal role in enhancing ties between Greece and the Arab countries. However, the 1967 Six-Day war between Israel and Arab countries, and the resulting shut-down of the Suez Canal for several years, put an end to the operation and Latsis eventually scrapped the fleet.

At the same time, his trading activities had gradually led him into ownership of both dry cargo vessels and tankers. Latsis purchased his first freighter in 1955 and operated it mainly between Greece and North Africa. In 1957 he bought two more cargo vessels from another Greek shipowner, Alexander Tsavliris – the Andreas Tsavliris and Nicolas Tsavliris. They were renamed Suez and Libya. By the 1960s he had a fleet of four cargo ships and had expanded operations to the Balkans and Black Sea ports, as well as northern Europe. First and foremost the vessels carried his own cargoes, including tobacco from a plant he ran in Thessaloniki. He broke into the tanker market in 1958 with a small tanker, the Spyros, to carry molasses, a commodity he was already trading, from Egypt to Volos for a sugar plant in Larissa. A first oil tanker followed in 1961 and he began chartering Egyptian-flag tankers. By 1963 he was transporting 400,000 tons of oil a year from Egypt and the same year he acquired a further four tankers of the wartime T2 type. At the same time he ordered two newly-built tankers of 66,000 tons and 74,000 tons from Japan and continued to grow his fleet with other acquisitions.

His never stopped considering himself a maritime personality. In the 1980s he donated $10 million to the troubled national Seamen’s Pension Fund. In 1986, he answered a call by the socialist government of Andreas Papandreou for shipowners to support the Greek flag. Four newly-acquired ultra-large supertankers acquired cheaply by the Latsis Group at the end of the crippling international shipping recession, were registered in Greece. They included the 550,000-ton Hellas Fos, the world’s second-biggest ship. The largest ever to be in Greek hands, it was immediately dubbed the flagship of the Greek merchant fleet. Thanks to the influx of supertankers, his Bilinder Marine Corporation by 1990 had a fleet of 3.8 million tons capacity, the second-largest of any Greek shipowner at the time.

With enormous energy in his 60s and 70s, Latsis expanded his empire into other fields. In the 1960s he had dreamed of joint ventures with Arab national oil companies. In 1968 he bought a small Greek petroleum trading company on a large plot of seafront land in Elefsina and the following year he founded Petrola Hellas. In May 1971 he gained permission to import $10 million for building an export refinery on the site. The Petrola Hellas refinery began operations in December 1971 with the largest storage capacity of any refinery in Greece, and second in terms of refining capacity. As with his early currant-trading business, Latsis believed that storage was a key to providing him with trading flexibility. This strategy proved its worth in the two oil crises that shocked the market in the 1970s.

In the following years, Latsis expanded his business interests with the Arab world and especially with Saudi Arabia. An engineering company, Petrola Engineering International, undertook huge industrial contracts, including construction of refining and port installations. In the 1970s he also created a salvage division, which undertook wreck-removals in Saudi Arabia. Close ties with the Saudi royal family saw Petrola International build a private jetty for King Khalid’s yachts. In 1978, he bought for King Khalid the famous Niarchos yacht Atlantis, the world’s second-biggest pleasure craft. Most notable of all, the Latsis Group’s joint venture Rabigh refinery with state oil company Petromin finally began operations in 1989. The refinery was one of the biggest in the Opec countries 325,000 barrels a day of refining capacity.

In the 1980s the group also diversifed into banking. Latsis acquired Banque de Depots, a small Geneva bank previously belonging to Onassis. Initially this was used mainly to serve the transactions of the group. But in 1989 the Private Bank and Trust Company was established in London with start-up capital of £100 million and ambitions to create a real presence in private banking. The next year the family also launched Eurobank, which would quickly become one of the largest banks in Greece.

Others areas of interest for Latsis included real estate and development, particularly in Greece and the UK. In 1981, Latsis purchased Bridgewater House in London as the headquarters for his UK operations. At Latsis’ invitation, the impressive early Victorian palace, not far from Buckingham Palace, in July 1990 hosted the first NATO summit after the end of the Cold War. The summit was notable for the London Declaration on a Transformed North Atlantic Alliance. For many ordinary members of the public, it must have been a first introduction to the Latsis name.

Latsis often hosted royalty and world leaders on his yachts – which appears to put him on a similar plane to the archetypal ‘Golden Greeks’: Onassis and Niarchos. By contrast, however, he was essentially a private person. The yachts could also be used for charitable purposes. In 1986, the Marianna IX was abruptly pulled away from its duties as a floating hotel for Petrola workers in Rabigh in order to provide emergency accommodation for people left without shelter as a result of the Kalamata earthquake. It stayed for two years.

His generosity often addressed specific needs and was spontaneous. In the 1980s he offered the Greek state equipment for the Fire Department, the Police and the Ministry of Public Order. He also created a programme to support Greek expatriates in Albania. Since his death in 2003 at the age of 93, the John S. Latsis Public Benefit Foundation has continued to provide funding in his name for specific social needs. 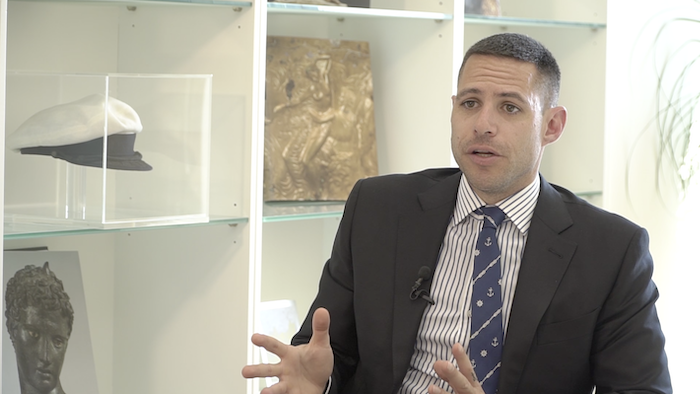