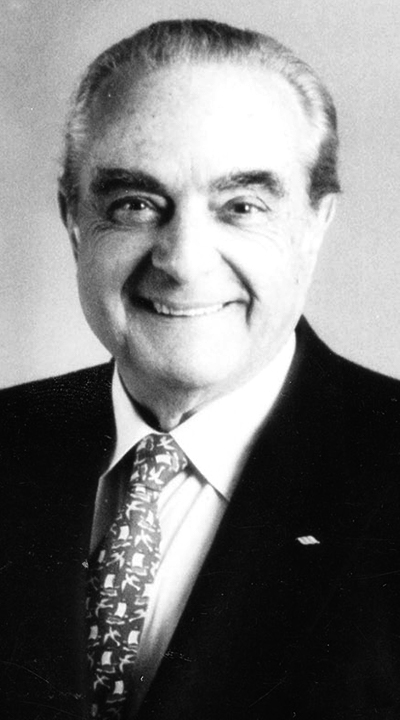 By virtually any measure, George P. Livanos belongs in the pantheon of the greatest Greek shipowners. In terms of size of fleet, he was the biggest Greek shipowner of the late 1980s and the 1990s, yet he was visionary when it came to the industry’s role in society and the shape of ships, and services, to come.

He also left an indelible legacy for shipping and the image of the shipping industry.

George P. Livanos was born in 1926 in New Orleans, although like so many other seafarers and shipowners his heritage lay in the Aegean island of Chios. He was educated partly at Athens college but the US was home for much of his early career. He served in the US army during the Second World War and later the Korean War.

As a shipowner, Livanos came on the scene some years after the ‘Golden Greeks’ generation of Onassis, Niarchos and C M Lemos came to the fore. Already the world was changing and the Greek-American shipowner was sensitive to many of the directions it was taking.

His earliest successes in the business came through the acquisition of war-surplus Liberty ships which he reactivated and then eventually sold in Japan for scrap. These repeated projects were lucrative in the 1950s as the charter payment for transporting a cargo from the US to Japan paid for the initial purchase and the reactivation costs – so the scrap sale was pure profit. The story demonstrates that Livanos – one of the most idealistic of shipowners – was also capable of a very hands-on approach.

In the 1960s, he took the helm of Ceres Hellenic Shipping Enterprises, the shipping company that his uncle, Captain John G P Livanos founded in New York in 1950. Eventually, he relocated the head office to Greece. Among the many innovative projects that he initiated, one of the first was the idea of ‘mini-bulkers’ that contrasted with an overwhelming trend for ever-bigger bulk cargo ships.

Capable of carrying about 3,000 tons of bulk cargo, these shallow-lying ships could cross oceans but deliver vital cargoes in under-developed ports or up inland waterways, close to where the shipment was needed. Many ports in Africa and Asia were located on rivers and could be reached efficiently only by shallow-drafted vessels. As the owner had conceived, they were ideal for playing a role in food-aid programmes, such as the UN relief effort for Bangladesh. Ultimately, Ceres built a total of 52 ‘minis’ in Japan.

Ceres’ main focus was international commodity shipping. But at the same time the company pioneered fast ferry services in Greece, introducing coastal passenger hydrofoils on an extensive network of routes linking the mainland with nearby islands. It brought a new era of quick, convenient travel for visitors to Greece and local commuters alike. For two decades, the services operated under the Ceres Flying Dolphins’ brand name, which became a household expression in Greece.

Livanos also plotted the construction of a series of large, fast ferries – possibly of a catamaran design – that could speed passengers and freight between Greece and the European Community. His project never materialised, but several big Greek ferry lines later built large conventional ferries for the Adriatic, responding to the outbreak of civil wars in the former Yugoslavia. Other companies also introduced smaller catamarans for the domestic ferry trades.

Livanos had a passion for looking beyond conventional designs of ships and glimpsing future possibilities. This led, for example, to a full prototype for a huge catamaran tanker – something that has so far never been built – as well as speculation in some of his speeches that one day in the future cargoes could be transported by rockets or submarines rather than by surface ships.

Few shipowners have been so excited – or so concerned – by science.

As early as the late 1970s, long before the world in general became familiar with the principle of climate change, Livanos had begun to heed warnings that abuse of the environment could destroy the planet. He was also concerned by marine oil pollution and a spate of oils spills from tankers that had blackened the industry’s name.

He believed that Greeks truly loved the sea and that they could provide leadership in improving the industry’s environmental protection record if shipowners and crews could be made aware in simple language about the damage caused to the sea, mainly due to ignorance and indifference.

To create the Hellenic Marine Environment Protection Association, Livanos had to overcome enormous skepticism among environmental bodies, seafarers and not least many of his fellow shipowners.

However, when Helmepa was launched in June 1982, both the national seamen’s federation and the shipowners’ union signed the new body’s mission statement, declaring a voluntary commitment to “save the seas” by eliminating pollution from ships. It was also endorsed by five major environmental organisations: the Club of Rome, the International Union for Conservation of Nature and Natural Resources, the World Wildlife Fund, the International Ocean Institute, and the International Institute for Environment and Development.

Helmepa was ahead of its time and the support for it was hard-won, a great tribute to Livanos’ determination, sincerity and evangelistic charisma. He was never simplistic in his thinking, though.

He believed that polluting fossil fuels were a necessary evil until they could be replaced by cleaner forms of energy. Until then, the oil trades needed shipowners of integrity and safe ships of top-notch construction for transportation.

Also in the late 1970s, he signed a letter of intent with Newport News Shipbuilding in the US for the construction of two nuclear-powered supertankers. These were to be built as American-flag tankers and the idea was to use the US’s advanced knowledge of nuclear-powered shipping as a springboard to put the country back into the forefront of marine technology. The project went as far as Congressional hearings, but was “torpedoed” by the US Navy which was worried about a potential drain of experienced nuclear crews from the Navy to the civilian world. Ceres expanded dynamically in tankers between 1987 and 1992, acquiring four of the world’s largest supertankers from Exxon, taking delivery of a significant fleet of brand-new product tankers and moving into the chemical trade for the first time through buying out the fleet of six chemical tankers that belonged to Canadian Pacific.

“The world still needs crazy people like us to buy them and operate them with responsibility and expertise,” he said of the tanker business.

He was the first-ever Greek elected to chair the Baltic and International Maritime Council (BIMCO), founded in Copenhagen in 1905 as the first association to represent international shipping interests. In the modern era, it has remained the largest of all shipping industry associations, providing the industry with quality information and advice. Livanos headed the organisation from 1989 to 1991.

He served the shipping industry in many other capacities. These included being a board member of the Union of Greek Shipowners and of the International Tanker Owners’ Pollution Federation, Member Emeritus of the American Bureau of Shipping and chairman of the Greek Committee of Det Norske Veritas.

Widespread admiration for his achievements and his character was reflected in the Seatrade organisation’s choice of Livanos as ‘Seatrade Personality of the Year’ in 1990. He was the first shipowner chosen for this distinction, following the introduction of the awards in 1989 when the inaugural Personality of the Year was then-IMO secretary-general C P Srivastava.

Although he also felt great allegiance to the US, the shipowner was highly patriotic and contributed energetically behind the scenes to many initiatives to promote Greece internationally. He was among the key figures in eventual establishing a Greek lobby in the US.

Throughout his life, Livanos believed in and promoted the related concepts of ethos and filotimo. Stemming from Greek philosophy, drama and popular culture, the terms conjure a combination of wisdom, virtue, goodwill and honour. They were qualities that he actually applied in his own shipping business and that he tried to inspire in others.

Many shipping executives are proud of belonging to one of the world’s most vital industries, but few have actively championed shipping’s moral purpose more than George P. Livanos. Today’s ‘greener’ times have only served to strengthen his reputation as one of the industry’s true statesmen.