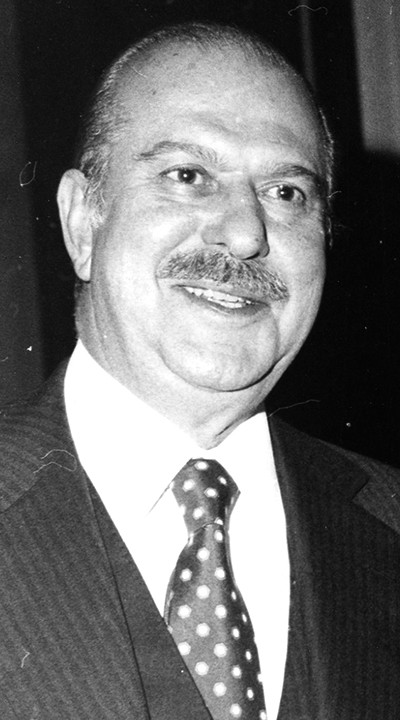 ANTHONY J. Chandris was a popular and admired shipowner during his lifetime, and he occupies a special place in Greek and international shipping history since the Second World War.

With roots in the island of Chios, the Chandris family was active in shipping during the age of sail. His father, John D. Chandris, made the family name a presence in the industry during the interwar years, but he died in 1942 at the age of just 52, leaving his widow, Evgenia Chandris, and their two sons, Dimitris (1921-1980) and Anthony to carry on the business.

The family had lost seven steamships – about half its fleet – during the Second World War, and was qualified to buy one of the Liberty vessels of about 10,000 tons being sold to Greek shipowners at the end of the war. In March 1947, the family took delivery of the 1943-built Nathaniel Macon, which became the Evgenia Chandris. In addition, the family was able to acquire one of the original seven T2 tankers of about 16,500 tons capacity that were allotted by the US for sale to Greeks. This was promptly renamed John Chandris and the family remained in both the dry cargo and tanker trades thereafter.

Although they were still very young men Dimitris and Anthony, then London-based, lost little time taking advantage of the opportunities that they saw after the war. By the time the family had received its first Liberty ship and tanker, Dimitris had already taken the initiative to acquire the Newcastle-based Charlton Steam Shipping Co. It provided a vehicle for a first passenger shipping operation focusing on the needs of post-war refugees. Initially, the company provided a service for the International Refugee Organisation, resettling displaced Europeans in Australia and the Americas. There followed charters to the British government, for troop deployments.

Their father had operated a passenger ferry between Piraeus and Corinth during the 1920s, and later a link between Greece and Italy. But his sons wrote an impressive chapter in the history of international passenger shipping, while maintaining their interests in cargo shipping. By 1960, the brothers and their mother had built up an impressive fleet of 30 tankers and freighters, but they had great ambitions for the passenger business. That year, Dimitris launched Chandris Cruises, one of the pioneers of the modern Mediterranean cruising industry. Meanwhile, Anthony had become convinced of the potential for ocean liners as migration from Europe boomed in the post-war era and established Chandris Lines, focused predominantly on transporting settlers from Europe to a new life in Australia.

The first ship, the Bloemfontein Castle, had initially been designed to carry migrants to South Africa for Britain’s Union-Castle Line. After acquiring the vessel, he refurbished it for the burgeoning trade for Greek migrants to Australia. Renamed Patris, the vessel made its first departure from Piraeus on December 14, 1959. During the next 18 years, Chandris Line focused predominantly on the Europe-Australia trade, including increased demand in the UK for passage to Australia. Several different ships were purchased. The key addition to the fleet was the SS Australis.

Formerly the SS America, the ship was the second-largest passenger liner in the US fleet when it was acquired by Chandris in 1964. The vessel duly became the largest passenger ship under Greek flag. Chandris Lines offered a one-class, relatively informal environment on board its ships, but with air-conditioned cabins, a lot of organised entertainment (for that era) and a high standard of food in the dining room. However, Chandris himself differentiated his service from luxury cruises that cost perhaps double the price. The company provided good service on board but the primary focus was on transporting passengers safely and pleasantly to their destination.

By the mid-1970s, the Chandris brothers – through their separate businesses – were operating the largest passenger-cruise fleet in the world with a combined total of 13 ships, surpassing the likes of P&O, Cunard and Union-Castle.

In 1978, Chandris suspended Chandris Line in response to increasing costs and a decision by Australia to end its assisted passage schemes for European migrants. In addition, the arrival of the jet age had made long-haul aircraft a powerful competitor and the passenger trade by sea began to suffer. Hundreds of thousands of passengers who travelled with the two companies, however, had come to recognise the name Chandris – making the family probably the most familiar Greek shipowning ‘brand’, with the possible exception of Onassis.

As Anthony Chandris did not have children, after his death the descendants of Dimitris continued in cruising for many years. They formed the deluxe Celebrity Cruises fleet with US-based Overseas Shipholding Group (OSG) as a 49% partner, until the company was acquired by Royal Caribbean International in 1997. Meanwhile the family had not neglected its cargo shipping business and by the 1960s was one of the top 10 Greek shipowners, with a fleet of about 30 ships. Chandris was among the first Greek companies to own very large crude carriers (VLCCs), ordered from shipyards in Denmark and Japan. In 1969, the 205,000 ton Evgenia Chandris was the largest tanker ever owned by a Greek company when it was delivered from the Odense shipyard. However this and two later newly built VLCCs were sold off in 1976.

The brothers commanded respect in the shipping industry. Older brother Dimitris had served a term as Vice President of the Union of Greek Shipowners from 1962 to 1964 and would later be elected to head the London-based Greek Shipping Co-operation Committee, only for his chairmanship to be cut sadly short with his death in 1980.

Anthony, who had a degree in marine engineering from Switzerland during a period when most Greek shipowners lacked a university education, had been elected as Vice Chairman of the London Committee during the 1960s. When democracy returned to Greece in 1974 with the fall of the military junta, he was a popular new President of the Union of Greek Shipowners. He accepted the post reluctantly, but it was soon clear he was the right man in the right place at the right time. Under Chandris’ leadership, the UGS for the first time became a broad church under which traditional London-based Greek shipowners began to mingle more easily with the dynamic ‘newcomers’ of Piraeus who, in their turn, would soon become stalwarts of the Greek shipowning establishment. He also encouraged younger shipowners and forged good relations with all political parties, a process that included a historic first meeting between a shipowner’s president and the leader of Greece’s Communist Party.

Drawing on experience of the passenger shipping trade and a naturally outgoing personality, Chandris was not afraid to reach out to the press and to create a more public presence for the shipping industry, in an effort to repair some of the damage that the shipping community’s image sustained during the years of the Dictatorship. He was outstandingly successful.

In responding to the new Greek government’s demands for reform, Chandris also ensured that the country’s favourable shipping legislation was included in the revision of the Constitution in 1976, setting the seal on its favoured status up to the present time. Internally, in running the affairs of the UGS, he was also a democrat, and his period in charge marked the start of a new era in the organisation which would guarantee proper elections and impose a maximum two terms of office on the President.

During his reign, Chandris helped to raise money from shipowners for national causes and he encouraged the shipping community to be supportive of the Greek economy. His own group exemplified this. The family had established an electrical goods and appliances company in 1960 and the following year founded its own shipyard on the island of Salamis near Athens. The yard converted and repaired many of chandris’ own ships. Chandris was among a group of shipowners who tried to establish the first Greek insurance company for shipping – Hellenic Ship & Aircraft Insurance, in 1964. He was also a partner in another insurance company, a brewery and a football team. The family also invested in several hotels, representing the largest presence in the sector among several shipowners who invested in the country’s tourism infrastructure.

Having been so successful in promoting a collective spirit among Greek shipowners, Chandris also pursued a vision of creating a forum which would draw together shipowners internationally for the common benefit. As a result of his lead the International Association of Dry Cargo Shipowners (Intercargo) was launched in 1980 and today it remains one of the leading associations in the world of shipping. Chandris served as President of the UGS until 1981, but illness cut short his career and he died at Memorial Sloan-Kettering Cancer Center in New York in November, 1984, aged 60.