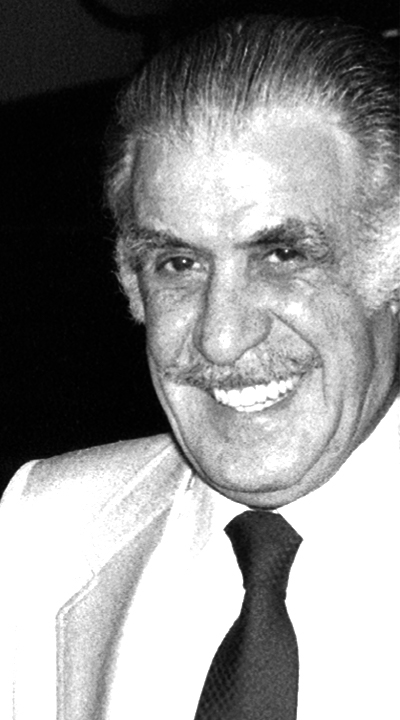 ANTHONY Angelicoussis was born in the village of Kardamyla in the island of Chios. His grandfather was the owner of a sailing boat and traded between the ports of the Mediterranean and the Black Sea. Numerous colourful incidents are related about him. Unfortunately, he died disappointed, because his son, John, Anthony’s father, was unable to maintain the family business.

After finishing high school, Angelicoussis wanted to go to university. However, the family could not afford to support him in further studies, so he followed a career in shipping – exactly like everyone else in the village.

While the post-war Greek shipping industry has numerous examples of captains who made remarkable careers for themselves ashore, Angelicoussis is a rare case of a major shipowner who in his seagoing career was a ‘Marconi’, the radio officer’s generic nickname. He became a radio operator, simply because he did not want the responsibilities of a captain.

When the Second World War began, he was sailing on a vessel of a Kardamylian shipowner, as was the custom; the vessel was torpedoed off Corfu in 1939. For another two years he continued sailing on other vessels, carrying material to British bases, until 1942, when he was torpedoed again off Haifa. By all accounts, the vessel sank almost immediately and survivors who dived overboard also had to contend with a sea that was ablaze with burning fuel. The 24 year-old radio officer was among 17 survivors but one-third of the crew perished.

He was picked up by the British, and the intelligence service sent him to Alexandria and trained him as a parachutist. The idea was to drop him and others on the island of Crete, which in 1942 was occupied by the Germans. Eventually, the mission was aborted, and the group was sent by submarine, because the commander had broken his leg while practicing.

Angelicoussis spent two years in Crete and was involved in the kidnapping of the German military governor of the island, General Heinrich Kreipe – a big PR coup for the allies. He was decorated twice by the Greek government for his courage and twice by the British government for his services. The intelligence service wanted Angelicoussis to continue working for them after the war, but he declined.

In 1946, he married Maria Papalios from the same village in Chios. Her brother, Nicholas, was a small ship owner, based in Alexandria, and needed agency services in Greece. Angelicoussis joined forces with a friend, Dimitris Efthymiou, who had a small agency office in Piraeus. It was 1947, during the civil war in Greece, which lasted until 1949. Maria, being very ambitious, strongly urged her husband to become a shipowner in his own right – the fashionable job in Kardamyla in those days. Angelicoussis in 1953 acquired his first ship, the elderly steamship Astypalia, together with two friends, Dimitris Efthymiou and P. Kaloudis. Soon the Parnon, which was 1,500 tons, was added. The three-leaf clover on the funnel signified the three friends.

In the mid-1950s there was a small fleet, but the prospects for these vessels were better in south-east Asia. Anthony moved to Singapore to be closer to his vessels and the charterers. From 1956-1960 he spent most of his time in Singapore. By the 1960s, Angelicoussis had based himself partly in London, which was effectively the capital of the Greek shipping industry at that time. There, he was a prominent member of a circle of Greek shipowners that would create a number of purchasing co-operatives as well as the Pegasus Ocean Services group.

In 1968 Angelicoussis and old partner Dimitris Efthymiou left Pegasus and together they established Agelef Shipping Company. The joint venture lasted about three years before it became clear that the two shipowners had very different visions and the duo split up, with the majority of the joint vessels being kept by Angelicoussis, who founded Anangel Shipping Enterprises. He also retained the company Agelef which has continued to be the London chartering, shipbroking and insurance arm of the group he founded.

The first new building was ordered in 1965, the Afovos, a 65,000 tons panamax, delivered in 1968 from Ishikawajima-Harima Heavy Industries (IHI). After 1965, Anthony moved into new buildings with a passion. Eleven Freedoms (Liberty replacements) were ordered, including one for his brother. These were 14,000 tons. After the 1971 split, he was left with eight vessels. In 1969, he started ordering at the same yard the 22,000 tons Fortunes, of which he ordered a total of 14. Next came the Freedoms Mark II, 17,000 tons and the Friendships Mark II, 23,000 tons. Finally, three Futures, which were 37,000 tons. In all, Angelicoussis had ordered in the space of 17 years a total 42 vessels, all designs of the George Campbell. The relationship soured, however, over the question of commissions being received by another Greek shipowner for vessels ordered by Campbell’s clients. Until then, Angelicoussis was the biggest supporter of Campbell and IHI. He ended up in court with IHI and was vindicated by the final judgement which came in 1989, soon after his death. It was a pyrrhic victory, because the company never did any business with Japanese shipyards again.

In many ways, Angelicoussis was ahead of his time. He insisted on a modern fleet of ships. He kept proper audited accounts for private shareholders and bankers. As early as 1972, he opted for a true corporate structure, incorporating Angelicoussis Shipping Group Limited in Bermuda as a holding company for all the shipowning subsidiaries. It was a preparatory step towards an intended public listing of the company that would have made him only the second Greek shipowning company to take such a step. He got as far as preparing the prospectus for a share issue, but the plan was put on hold due to an impending recession.

Son John joined him in 1973 and eventually, in 1987, the vision was realised with the flotation of Anangel-American Shipholdings on the Luxembourg stock market with American Express Bank as a partner.

In June 1989, Anangel-American raised $107 million in a secondary public offering and was listed on the Nasdaq stock exchange in the United States. Sadly, that was also the month that the group’s founder passed away.

Anthony Angelicoussis was recognized as one of the leading shipowners of his generation, and a strong supporter of the Greek flag and of quality, safety and education for seafarers. He was widely-known in the industry for his integrity in business and his operating standards. However, he was also a strong personality who wanted the best and was demanding but fair in negotiations. According to his son John, his father instructed him that he must always leave something on the table for the other side.

John Angelicoussis, who later built the company into the world’s largest privately-held shipowner, has said that he learned many lessons working alongside his father, who said: “There will be both good times and bad times. We will face challenges from many different and unexpected directions. But the fundamental lesson he taught me, is that by showing respect to our people, we create a deep and mutual loyalty.” John Angelicoussis has also said that “working alongside your father is very difficult, but he was a born gentleman and never criticised me for my mistakes.” He continued: “This made me feel more eager to correct them. I spent 16 years working with him and every year was better than the previous one.”