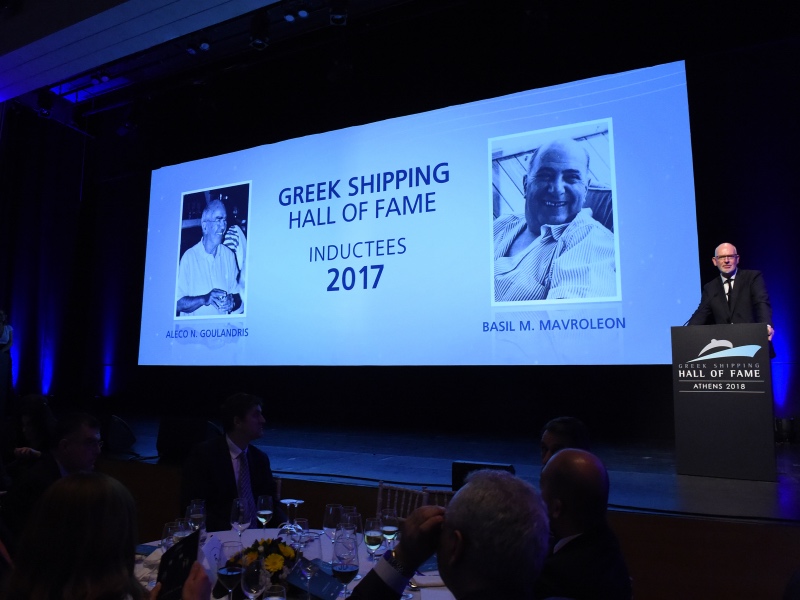 Shipowners Aleco N. Goulandris and Basil M. Mavroleon have been inducted into the Greek Shipping Hall of Fame.  The two historic industry personalities were revealed as the Inductees for 2017 in front of more than 600 guests at a special Induction Ceremony & Dinner held at the Megaron, The Athens Concert Hall. Voting for Inductees takes place annually and is open to members of the Greek Shipping Hall of Fame Academy, currently numbering about 300 prominent individuals in today’s Greek shipping community. The integrity of the on-line voting and the final results are overseen by the international audit firm, Deloitte.

Aleco Goulandris, who passed away last year, was the last surviving of the founders of the N.J. Goulandris group, as well as a noted art collector and philanthropist.  Together with his twin Leonidas (1927-2009) and older brother (and Greek Shipping Hall of Fame Inductee) John N. Goulandris (1923-2011), Aleco established N. J. Goulandris Ltd in 1953 as a spin-off from the existing Goulandris family shipping business begun in the 19th century. The new company was named after their father Nicholas and quickly became a leader in post-World War Two Greek shipping. It was among the first international shipowners to turn to Japanese shipyards and established a high-quality fleet of oil tankers. But it also had a continuing interest in dry cargo ships and was the first Greek shipowner with newly-built bulk carriers, thanks to two vessels delivered in 1956. Aleco Goulandris was highly supportive to his home island of Andros, but was also a national benefactor. Unknown to most Greeks, he quietly sponsored many concerts at the Athens Concert Hall. Other causes he funded in recent years included assembling a new legal case for returning the Parthenon Sculptures from the British Museum, and an ambitious renovation of the historic steel battleship Georgios Averof.

Basil Manuel Mavroleon gained his early experience in shipping at Rethymnis & Kulukundis, the pivotal company for Greek shipping interests in London prior to the Second World War. He soon became one of the leading lights of R&K as well as a leading shipbroker active at the Baltic Exchange.  After the war, he established the Mavroleon Brothers shipping firm and launched London & Overseas Freighters, which was co-owned with the Kulukundis family. His many claims to fame including leading LOF to a listing on the London Stock Exchange in 1951, more than 30 years before any other Greek shipping company was publicly traded. LOF later acquired the Sunderland shipbuilder Austin & Pickersgill and Mavroleon conceived the idea to build an economic dry cargo replacement for the aging fleet of wartime Liberty ships. He personally inspired the design of the new 14,000 dwt dry cargo ships known as ‘SD 14s’, many of which were built at A&P. In all 211 SD 14s were built in the UK and under licence in Brazil, Argentina and Greece, including 27 at Hellenic Shipyards, making it the most popular of the various Liberty replacements. Buyers included many Greek owners. The Inductees for 2017 will shortly be featured with full biographies and other media in the Greek Shipping Hall of Fame. An independent organisation established to bring the fascinating story of Greek shipping to a wider public, the Greek Shipping Hall of Fame has been paying tribute to leading personalities from Greece’s past shipping history since 2007. With the addition of Aleco N. Goulandris and Basil M. Mavroleon, the Hall of Fame now includes 28 outstanding personalities of the shipping world.